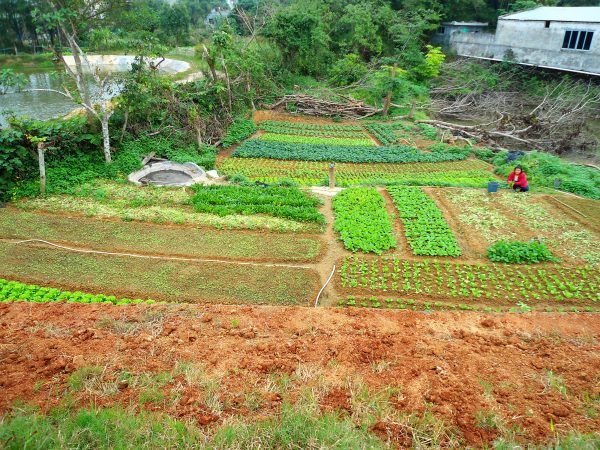 After discussing some recent news related to shortages and prices in the energy and fertilizer sectors, we predict the emergence of organic garden-farms in Europe due to economic contractions and climatic insecurity.

The british shortage on CO2, explained.

You may have recently read in the news that UK’s CO2 stocks are running out. CO2, well known for its climate change inducing impact, is sold in food grade to the industry for various uses.

While the impact on sodas (and beers!) is damaging, lack of food grade CO2 is disastrous for the meat industry, as the gas is used in slaughterhouses to stun animals.

The roots of the problem are interesting: industrial food grade CO2 is a by-product of the fertilizer industry, and fertilizer production is not profitable enough today due to the very high cost of energy since summer.

And as the British supply chain recently rediscovered the concepts of “borders”, “customs” and “Polish lorry drivers”, brits are having trouble with importing the low-value gas en masse.

Yes. Un. The subjects of Her Britannic Majesty will have to thank Brexit for their shaking economy. Hurray for a mess of epic proportions caused by public opinion manipulation, low-quality political personal and total lack of planning.

Deux. We must collectively thank the globalized economy for volatile energy prices. We’re back to producing unnecessary products and transporting them all over the world after the COVID crisis. Our winter energy bills will be awesome.

Trois. This situation shows how food today is depending on other industries and the global economy. Having no fertilizer at all could be quite damaging for intensive farming agricultural exploitations. This is important, let’s dig that part shall we.

Let’s rewind a bit on our little story: CO2 is missing, due to Fertilizer not being profitable enough, due to Energy prices rising, due to Global Economy peaks and speculations.

We see that the prices and stocks of fertilizers are depending on geopolitical and economical events.

We know how industrialized agriculture –washed soils depending on chemicals– can suffer from such shortages. As such, its stability is not really good.

Crisis should keep coming in the coming years for many things like energy, climate, social, political, ressources like water.

While industrial agriculture is devaluated, it still costs much, and organic food is even more expensive.

It is also well-known that the price of many agricultural food materials is determined by stock trading and speculation. Wheat price, for example, almost doubled in the last 5 years.

While organic agriculture is something people hope for, it is rising too slowly compared to demand, and small farms are disappearing in Europe, which makes agricultural models transitions harder.

Socially, unemployment and free time are increasing in the western countries. Wages are stagnating, taxes are rising.

It subsequently appears that food will become increasingly problematic for people : prices, quality, and security/availability.

With all this in mind, we can predict that smaller exploitations will emerge from the economical contractions in Europe

It is interesting to consider the potential geographic and sociologic evolutions induced by this trend: it will bring more and more “informed” urban young people to remigrate territories formerly abandoned due to rural desertification.

So we predict the rise of these “small farms”. A new complete article is required to explore their typology, let’s just analyze now how the history behind such structures.

It appears this model of “organic garden-farms emerging in time of troubles” is not new.

A spokesman for the meat processors said that carbon dioxide is used to stun animals like pigs and chickens before they are slaughtered, under regulations intended to protect animal welfare. The gas is also injected into meat packaging to extend the shelf life in supermarkets.
The sudden worries about food supply illustrate how problems in one industry — in this case record-high natural gas prices — can quickly ripple across into others in a tightly interconnected economy like Britain’s. Analysts blame the high gas prices on surging demand from China and low storage levels in Europe with winter coming.

US company CF industries will restart carbon dioxide (CO2) production this week at one of its two shuttered UK plants after the government offered financial support. CF closed both plants last week after soaring natural gas prices made it uneconomical to produce CO2, a byproduct of fertilizer that is derived from natural gas.

With companies from all around the world trying to get their hands on energy sources, prices began steadily rising. By August, they were breaking records. Traditionally, gas is cheaper during summertime and companies seize the moment to store it in large volumes to be well prepared before winter arrives. But the ongoing price crisis disrupted the custom and current reserves are historically low for this time of the year, an ominous sign for the coming months.

A post-Brexit shortage of truck drivers as the COVID-19 pandemic eases has sown chaos through British supply chains in everything from food to fuel, raising the specter of disruptions and price rises in the run-up to Christmas. Drivers lined up for hours to fill their cars at petrol stations that were still selling fuel, albeit often rationed. There were also calls for National Health Service (NHS) staff and other emergency workers to be given priority.

With the collapse of the USSR, Cuba lost its main trading partner and the favorable trade subsidies it received from it, as well as access to oil, chemical fertilizers, pesticides etc. From 1989 to 1993, the Cuban economy contracted by 35%; foreign trade dropped 75%. Without Soviet aid, domestic agriculture production fell by half. During this time, known in Cuba as the Special Period, food scarcities became acute. The average per capita calorie intake fell from 2,900 a day in 1989 to 1,800 calories in 1995. Protein consumption plummeted 40%.